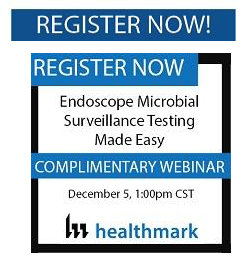 The featured speakers, Mary Ann Drosnock, MS, CIC, CFER, FAPIC, RM(NRCM) and Alpa Patel are experts in the realm of microbiology and the current standards for endoscope reprocessing.

The Food and Drug Administration (FDA) has published guidance for medical device manufacturers that is intended to mitigate the risk of cross-contamination from valves and accessories used with flexible gastrointestinal endoscopes. This is the latest in a series of recommendations the agency has released following an outbreak of infections linked to flexible endoscopes.

Between 2012 and the spring of 2015, endoscopes caused at least 250 life-threatening infections worldwide, including infections with the superbug carbapenem-resistant enterobacteriaceae, according to the results of an investigationconducted by a U.S. Senate committee.

In its most recent guidance, which was first proposed in January 2015, the FDA aims to highlight the cross-contamination risk associated with specific irrigation valves and accessories used with flexible gastrointestinal endoscopes, clarify terminology related to these devices, and outline risk mitigation strategies.

During a colonoscopy or esophagogastroduodenoscopy, stool, blood, or other fluids can travel from the patient back through the endoscope channels and tubing to contaminate the water bottle or other accessories used for irrigation. Clinicians typically use the same water bottle for multiple procedures, potentially transferring harmful substances or disease-causing agents from one patient to another.

“FDA has received reports of backflow from irrigation channels into the water bottle and tubing when the irrigation channel did not have a backflow-prevention mechanism in place,” the agency wrote in its guidance document. “Although FDA has not yet received reports of infection that can be attributed to backflow, the risk of cross-contamination should be mitigated by following the measures recommended.”

The FDA recommends that endoscopes contain at least one device component in the irrigation system that has a backflow-prevention valve or another backflow-prevention feature. If the device doesn’t have one of these, the FDA states that “all components of the irrigation system should be reprocessed or discarded after being used during a procedure in one patient and before starting one in the next patient.”

The FDA also recommends that device components in the distal irrigation system—the tubes closest to the patient—should either be reprocessed or discarded between procedures, with labeling that identifies these components as “single-use” or “reusable,” among other options.